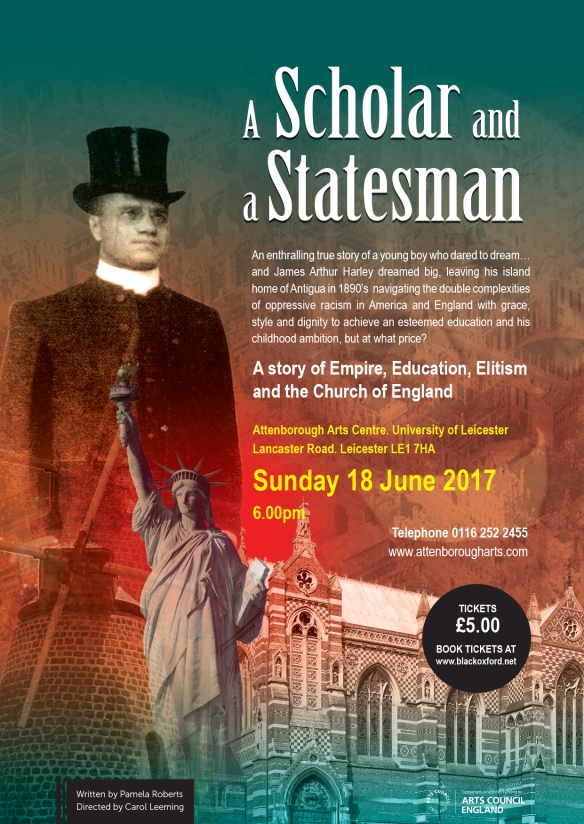 On Sunday June 18th 2017 at the Attenborough Centre, the staged rehearsed reading of A Scholar & A Statesman, an important  play written and produced by Pamela Roberts FRSA, with myself as Dramaturge/ Director took place. The play had seven professional actors and it features the story of a local Leicestershire hero. Arthur James Harley, who was born in Antigua, he lived at the turn of the century and settled in Shepshed Leicester, after a number of Academic Achievements at Harvard USA, and Oxford England, before becoming a Reverend of the Church of England.  At the Attenborough Centre there was a good attendance, of a diverse audience made up, various locals, prominent members of the Antiguan community, along with with her Excellency  Karen Hill, the High Commissioner of Antigua & Barbuda also present.

The event was ably introduced by Host Makeda and throughout the reading the actors gave very strong performances, that captivated the audience throughout. After a warm round of applause, Makeda then briefly interviewed Pamela Roberts, Carol Leeming and three of the Actors, to comment on their thoughts and experiences with regard to the play. There then followed a lively Q&A with the audience, e.g questions around the writing of the text, staging the reading, or specific characters of the play.  Many audience members expressed not only their enjoyment of the piece overall, but their connection to  the themes highlighted in the narrative text. There were many favorable comments from the audience members, as to specifically the acting, directing lighting etc. along  with their wish to see the final production.  In addition , for this production to be widely shown, as performance and also with audio, printed background materials, to be shared across England, and in Antigua itself as part of important Black History,

In early April 2017, after receiving a request for my email address via private message on twitter from Hix Eros. The name prompted me find out more about the person wanting to get in contact. It turns out that Hix Eros on twitter, proved to be a certain Dr. Joseph Walton aka Jo Lindsay Walton, Poet Novelist Ph.d Creative Writing Lecturer, Leicester University and Poet-In Residence at Surrey University. Joseph Walton is the Editor of Hix Eros the title of an online poetry review magazine, published jointly with Sad Press. Hix Eros Reviews and Sad Press (set up in 2009) publishes experimental poetry chapbooks –of up to five a year. Joseph Walton is also one of the organisers of regular poetry events in Bristol.

I mention all this, to show the steps I’d taken to establish who this person was. After I had done so, I forwarded via private message on twitter my email address to Hix Eros. After which I received an email, inviting me to read my poetry, at the forthcoming Surrey Poetry Festival May 6th2017. I was at once delighted and edgy with anticipation. Later on after receiving some event information from Joseph and researching the festival. I understood the festival was known for hosting many published British and International experimental poets, many of them also editors of poetry publications or academics.

After a pleasant relatively trouble free drive south to Surrey, with my driver and travel companion Adam. We arrived at G Live –a brand new very large Arts Venue in Guildford. There was a series of different literary events taking place across the building. We were guided to the Rock Room, a large room with rows of chairs. There was already audience members in attendance. We then met Joseph, who greeted us warmly and went over the running order. I was on in the first section of the programme. We then set up my books on the poets book table and Festival Staff took over the sales role.

By now I was clear on the poems I was to read from my chapbook The Declamation of Cool Eye given the time slot, but I had one poem not part of that collection. I was not sure if I should include it. I decided I would see how things went with the first couple of poets and the mood of the audience.

Needless to say, I was somewhat nervous in this new environment, with many English Literature and Creative Writing academics in attendance. I was a world away from Leicester Poetry Open Mic nights like Shindig (Nine Arches Press/Leicester University) WORD or Pingggk! Here, no one knew me, or my poetry at all apart from the programmer.

When I asked Joseph how he had come to book me for the festival he said, that I had been recommended, by Tom Kew a colleague and fellow lecturer at Leicester University. Tom Kew was familiar with my work, he teaches English Literature & Creative Writing Undergraduates, and uses my poems Valley Dreamers and Highfields Fantasia in is lectures, included in a Bloodaxe Anthology and Welcome to Leicester Dahlia Press.

Before I went on to read, there was a couple, poets from Ireland with their young son of three years. They read a poem as a duet, parallel voices alluding to their life and relationship. The woman’s poem was clipped and chaotic and the man’s measured and reflective. At various points, their son distributed pieces of papers, to members of the audience with short poetry quotes from other poets. The woman at one point used a slang word for masturbation. It was then I realised I could do my poem, the one I was initially unsure of. Due to it also having a slang word for semen. My Breaking the Silence poem is about sexual violence written as a letter to the perpetrators shirt.

When it was my turn to read it felt like the first time I’d read poetry to an audience. There was much paper shaking in my hands, but I proceeded to relax as time went on. Certainly by the time I read Breaking the Silence I was in the swing of things. I also read or rather sang my poem Autumn Rage, which and allowed me to use my voice in a different way. Joseph’s comment was ‘that was fantastic’. audibly immediately after I had finished reading to the audience,

There then followed warm prolonged audience applause, my relief papable, my face mirrored the audiences’ smiles all round. Later Joseph shared with me, how pleased he was I had sang Autumn Rage Plainsong. As he knew I was a singer, but he did not feel he could ask me to do so. Other audiences members, took time to tell me how much they enjoyed my poetry. I made new contacts and colleagues, mingling with the other poets and sold some books! All together it was very successful enjoyable experience.