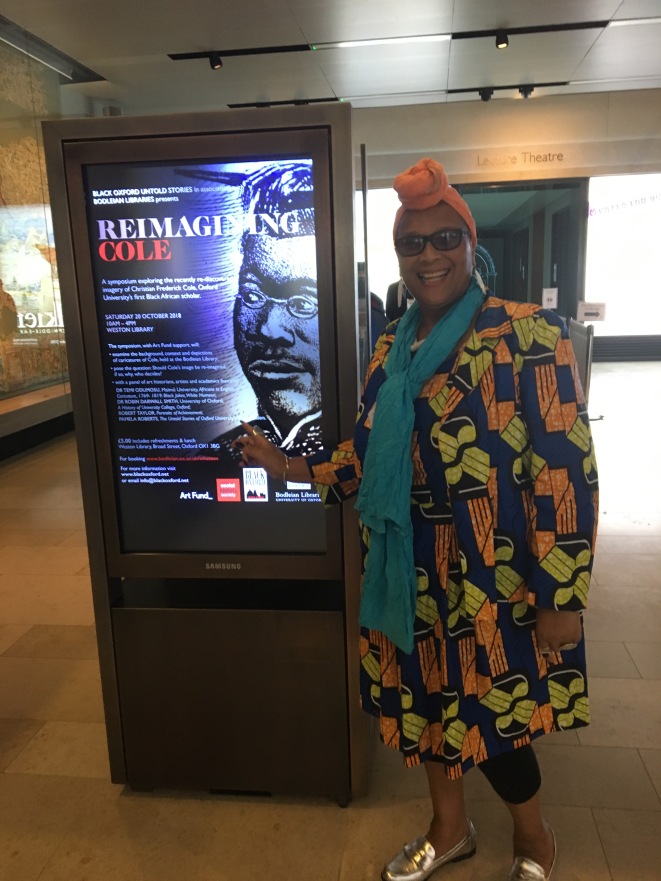 Carol Leeming FRSA, during Black History Month 2018 , was appointed by Black Oxford  Untold Stories led by Pamela Roberts FRSA,  to be the Chair for a fascinating Symposium at Bodleian  Library on the Fredrick Cole of  Sierra Leone , the first ever Black Oxford Scholar in the 1900’s.

Pamela Roberts of Black Oxford Untold Stories,  firstly, outlined the paucity and inappropriateness of  images available,eg caricature of Fredrick Cole, ie. of such an important and significant Scholar, to have graduated at Oxford University.  A plaque of Fredrick Cole was unveiled in the previous year, opposite the Law Faculty at Oxford University, attended by Pamela Roberts and Oxford University dignitaries.  The Symposium panel consisted various academics, creative practitioners,  who referred to the negative images of Africa past and present, eg. the racist caricature of Cole, Oxford University archive of publications of caricatures of the period, Fredrick Cole’s life at Oxford, Portraiture of Black Success, and making and erecting Statues. The event included a brief dramatic performance by two actors, who brought Fredrick Cole and a University rival to life, in a recorded argument they both had. There was also a lively discussion with attendees and many useful suggestions offered from the audience, as to the ways of moving forward, to best honour the legacy of Fredrick Cole in Oxford and beyond.

Carol Leeming had a busy night of it, giving speeches firstly, alongside Leicester Author and Patron Bali Rai of the Leicesters’ Everybodys Reading  Festival at the Central library.  With Carol then going on afterwards to give a speech and poem, for the  launch of Serendipitys’ Black History Month Launch at 2 Queens which featured a performance by Zimbabwean artist Nora Chipuire now based in NYC. 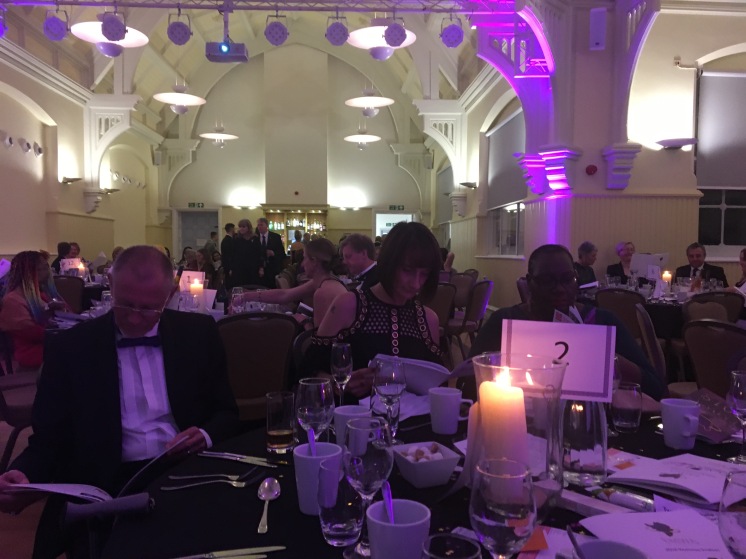 Carol Leeming  FRSA was commissioned to write and perform poetry, for the East Midlands Women Awards Event 2018, by Sandra Pollock founder, of the prestigious  East Midlands Women’s Event. Carol was a winner of the Outstanding Women in Arts Music & Media  Award, sponsored by Dluxe magazine in 2017. So Carol was thrilled to take part in the event, in its second year  with a notable increase in interest and attendance across the East Midlands region. The event celebrates the wonderful achievements of Women, from all backgrounds and walks of life, from business, arts culture, academia and the voluntary sector.

Carol wrote and performed her poem Against All Odds a concrete poem, that on the page mirrors the hard won steps, women make to achieve their dreams and ambitions in life. The poem was received most warmly. with Carol receiving numerous compliments thereafter. Attendees are encouraged to nominate women  now from across the region and to look forward, with some keen anticipation to next years event.

In September Carol Leeming FRSA, was appointed by Nikolai Foster at Curve for the production of Memoirs  of An Asian Football Coach a play written by Douglas Irvine adapted from the memoir of Riza Khan, now a reformed member of the notorious Baby Squad Gang , Riaz is  now a De Montfort University Lecturer in Leicester.

Carol’s role was to support the two leading actors, to deliver credible Leicester accents. Utilizing her skills as an actor herself and vocal coach, but also a full knowledge and understanding of the very unique Leicester dialect. Carol found the actors, enthusiastic and quick to learn, they absorbed much of what Carol was able to offer them. Carol found the whole process fun and enjoyable. The whole production was a resounding success, with rave reviews from audience members, many from first timers to the theatre and press alike.   Carol’s successful work was affirmed when some of the ex members of the Baby Squad who came to see the show, vouched for the authenticity of the accents. Carol’s contribution was notable highlighted  in a favourable  review article of the show in the Leicester Mercury.

Carol Leeming FRSA lead artist with Dare to Diva is delighted to be re appointed as Music Director for 2 Funky Arts Project Live Leicester, led by Vijay Mistry , it is a project working with cohort of of mid career Urban music artists, and two professional session music bands. Carol will mentor and develop the artists to take them to the next level with their music and performance.  The artists will also access Master Classes from music industry professionals in Intellectual Copyright, Business Development, Songwriting and Performance skills. Carol work with the artists and bands, to produce a live showcase of the artists, for Music industry professionals to attend, and record and produce at HQ Studios Leicester,  a Group compilation album of the artists, for promotional purposes only.